How the Clivus Multrum Works

Since its invention in 1939, Clivus composting systems have been used in parks, commercial buildings, and homes as the sole method of treating toilet and urinal waste. The composting process is reliable, convenient and safe. Its results are both conservative and productive; water is saved from use as a carriage medium and the fertilizer content in excreta is made available for reuse.

Installations with seasonal start-ups and shut-downs are serviced very easily. And there is no negative effect on the composting process while the system is in a dormant state of no use. “Shock loading” for single events or even entire seasons is factored in during the design process to eliminate any concern.

The Clivus system uses aerobic mesophilic decomposition to slowly break down both urine and feces into stable compounds within the composting system. The Clivus design separates urine from feces.

As urine moves by gravity to the lowest point of the composting unit, bacterial action causes a chemical transformation that converts the chemically unstable components of urine (urea and ammonia), into a liquid end-product containing nitrite and nitrate. This liquid end-product is biologically and chemically stable and contains nutrients which are valuable for fertilizer. The liquid end-product is generated at a rate of about one gallon for every 20 uses and, in most cases, is automatically pumped from the compost chamber into a separate storage tank. 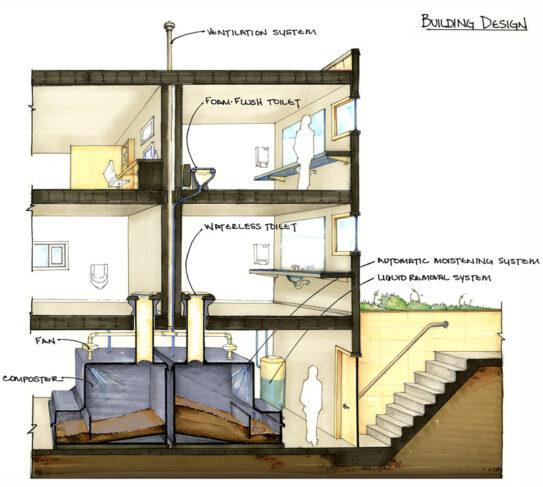 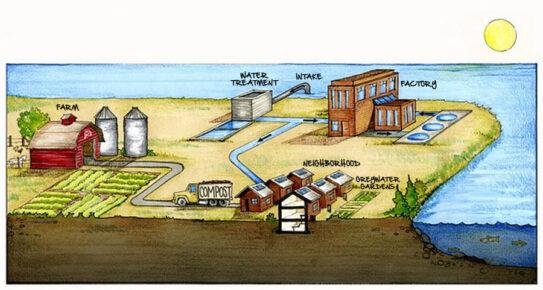 Composting is the bio-chemical decomposition of organic matter by aerobic organisms, i.e., organisms which get oxygen from the atmosphere and give off carbon dioxide. Composting takes place in all soils which support plant and animal life. The Clivus systems employ the same process in the controlled environment of the compost chamber and, therefore, cannot produce methane.

This process is distinct from anaerobic decomposition, which takes place naturally in water-saturated environments such as swamps, and is typical of septic tanks. Anaerobic, or liquid-saturated, conditions produce methane and the offensive odors associated with septic systems.

Organisms in the composter include bacteria, actinomycetes, fungi, arthropods, and earthworms, and are added manually once the system is operating. Energy, carbon dioxide and water vapor are released by the organic matter in feces through the activity of the composting organisms. A less chemically complex, more chemically stable substance rich in organic matter is produced. Feces volume, which is mostly water, is reduced by over 90%.

Temperatures in the composters remain in the middle, or mesophilic, range (65-113°F). Potential pathogens in feces are, therefore, not destroyed by heat. Those pathogens that require an aqueous environment die quickly in the non-saturated condition of the compost chamber. Others die because of the intense competition for nutrients; still others are consumed by predators which populate the system. The biological content of the dry end-product is similar to that found in topsoil. As a measure of its stability, the dry end-product from the Clivus system contains less than 200 MPN (Most Probable Number) of fecal coliform per 100 grams. This meets the level required under National Sanitation Foundation Standard 41 for Non-saturated Systems. The dry end-product contains a wide array of plant nutrients and is intended to be used as a fertilizer/soil conditioner. Its use may or may not be regulated by local authorities.

Urine is also transformed by the activity of microorganisms. As compared to feces, urine contains most of the nitrogen. The primary form of nitrogen in urine is urea. Left alone, urea will degrade into ammonia and carbon dioxide. Bacteria in the compost unit (specifically Nitrobacter and Nitrosomonas) prevent this degradation and, instead, convert urea into nitrite and nitrate. That these are forms of nitrogen required for plant growth indicates the value of the compost for nutrient recycling. The liquid end-product from the Clivus system contains less than 200 MPN of fecal coliform per 100 ml, the same EPA standard for swimming quality water. This also meets the level required under National Sanitation Foundation Standard 41 for Non-saturated Systems. The nitrogen-rich liquid end-product is intended to be used as a fertilizer. Use of the liquid-end product as a fertilizer may or may not be regulated by local authority. 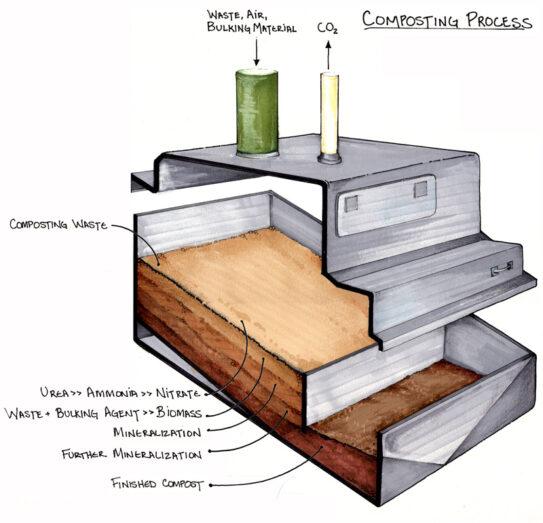 Conventional ‘waste’ treatment systems (both sewer and septic systems) pollute by design. That is, they are not intended to capture nutrients from human excreta in a form that would allow their healthy re-use. Instead, both systems mix excreta with a large amount of water, and both discharge most of the nutrients into water: sewers into oceans, bays, and rivers; septic systems indirectly into groundwater. In oceans, rivers, and bays this causes first, the proliferation of aquatic plant life, then, as the plant life dies and decays, the removal of oxygen from the water and finally, the destruction of habitat.

Sewer and septic systems invite toxic substances from industry and homes to be mixed with excreta. Thousands of chemicals from manufacturing processes are inevitably found in sewage sludge. More importantly, the toxic components make their way back to water and our food supply. In a perversion of the idea of recycling, sewage sludge is applied to farmland as fertilizer or sold at retail stores for use in home gardens under the disingenuous title “biosolids.”

These dangerous practices are new and unprecedented. For nearly all of our agricultural history, humans have practiced sustainable farming, including the use of our excrement for fertilizer. Only in the second half of the 20th century did those of us in North America and Europe begin to abandon the principles of reuse that were once required by our circumstances. 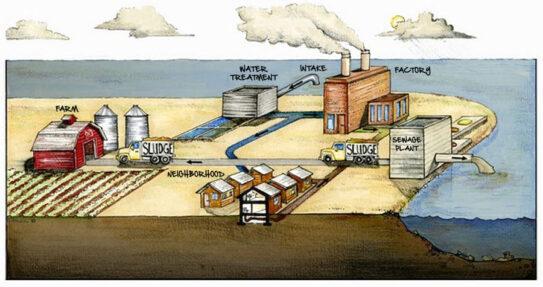 Greywater is defined as wastewater that originates from clothes washers, bathtubs, showers, dishwashers, and sinks, but does not include blackwater: wastewater from toilets, urinals, or sinks with garbage disposal units.

Although greywater contains less than 10% of nitrogen found in blackwater, greywater has a higher level of un-reacted organic material readily available to micro-organisms and therefore decomposes much faster than blackwater. Blackwater, by contrast, contains material already exposed to one of nature’s most efficient “treatment plants”: the digestive tract of the human body, which means further decomposition will proceed much more slowly. The high decomposition rate of greywater allows it to quickly achieve chemical stability through organic reactions in the soil, but this rapid decomposition rate also requires greywater to be treated shortly after its production. Greywater should not be stored in holding tanks as it will quickly use up available dissolved oxygen and begin to decompose anaerobically, producing an offensive odor.

Clivus systems discharge greywater into the biologically active, aerobic layer of the soil (the top 12″) in order to fully stabilize the liquid. In this level of soil greywater is treated by many of the same soil organisms present in the composters: bacteria, actinomycetes, fungi, arthropods, and earthworms. Nutrients in greywater from soaps are used by plants; the greywater not taken up by plants assists in groundwater recharge. Although pathogen levels in greywater are much lower than blackwater content, most potential pathogens will be slowly consumed by naturally occurring predators.

The separation of urine from feces ensures that feces remain in an aerobic environment which includes bacteria, fungi, and compost worms. The organisms slowly break down feces into a compost material that has chemical, biological and aesthetic characteristics similar to topsoil and reduces its volume by over 90%.

Since the mass of organic matter in the composting unit available to the decomposer organisms is relatively small, temperatures inside the composting unit never exceed 100°F. Carbon dioxide (CO2) and water vapor are the primary vent gases. A continuously operating fan pulls air down the toilet and urinal fixtures and out through a vent stack creating a completely odorless bathroom at all times.

Potential human pathogens are either killed by predatory organisms or by the long retention time in the system, as demonstrated by National Sanitation Foundation field testing. No compost is removed before two years of use, and it is often several years before any is taken out.

All Clivus composting systems are certified under the National Sanitation Foundation’s Standard 41, as is required by many state and local governments. Health or environmental codes regulate the use of the liquid or solid compost products from the Clivus system. 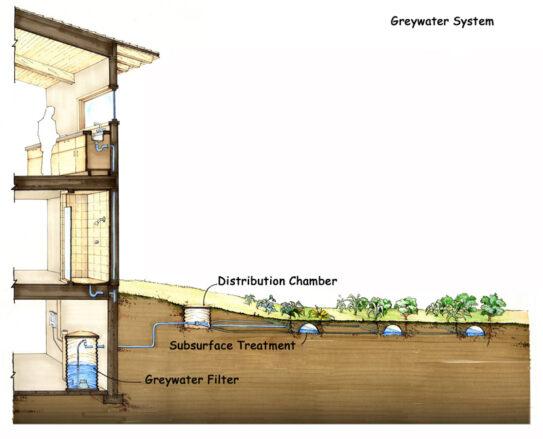 Learn more about the foam-flush toilet

GREEN-SUSTAINABLE
Does your project demand high water efficiency? I was sustainable designed to reduce waste water and save money.
LEARN MORE >>>